GO! Southampton lit up the city last week, by displaying an impressive projection-mapping experience on the iconic Grade I listed Bargate.

The Business Improvement District (BID) hosted a special VIP event for the occasion, which saw headline sponsors toob, Igloo Energy and representatives from Southampton City Council among those attending.

Using state of the art mapping technology, the projections revealed a unique visual experience never seen in the city before bringing the building to life.
Set over three days, the show included footage from a number of stakeholders across the city including ABP Port of Southampton, Southampton Football Club, toob and the city’s archives all of which will be brought to life.

Giles Semper, chief executive of GO! Southampton said: “We had a fantastic night and were delighted to invite so many of our supporters to see this spectacular event – a first of its kind in Southampton.

Nick Parbutt, CEO and Founder of toob added: “We are delighted to support this spectacular projection mapping show which tells the story of this incredible city. Through our recent work rolling out £50m worth of brand new full fibre network in the city, we are proud to play a part in Southampton’s exciting future by improving its digital connectivity.”

BBC2's 'Interior Design Masters' is back for a second series and currently searching for retail spaces to feature in the show. If you're an independent business in need of a free style overhaul, please email rhia.douty@dsp.tv to find out more. 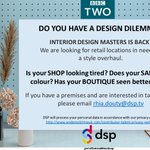 Southampton residents and visitors are being urged to plan ahead before visiting the city centre this weekend, as the hospitality sector begins to reopen. In line with national guidance, pubs, restaurants and cafes are allowed […]