Thousands of festive fun-seekers descended upon Southampton for the city’s annual Christmas lights switch-on event on November 14 – which played host to an evening of Yuletide fun.

Organised by GO! Southampton, in conjunction with Southampton City Council and The Marlands Shopping Centre, the festive theme of the evening was reminiscent of the Dickens classic ‘A Christmas Carol’ – focusing on Southampton’s past, present and future.

Headlining the event was 90s favourites East 17, who performed a string of classic hits including It’s Alright, House of Love, and their 1994 Christmas smash-hit Stay Another Day.

The evening extravaganza sponsored by Igloo Energy and hosted by Wave 105’s Mark Collins, was packed with a variety of festive entertainment. The event included star of television and theatre, Darren Day, who took centre stage to sing White Christmas, marking his pantomime season at the Mayflower where he will perform with the cast of Peter Pan.

Southampton’s Rock Choir sang some of their best feel-good Christmas numbers, and there was also music from other local artists and community groups, including singer Russell Jones and Rock Choir.

Fans of the city’s Christmas lights switch-on were also pleased to see the return of flying Santa, while also having the opportunity to enjoy all the festive food, drink and gifts from the Christmas Market.

Giles Semper, executive director of GO! Southampton said: “We couldn’t be more thrilled with the turnout on the night, and it was fabulous to welcome iconic 90s boy band East 17 to the stage. We’re often told that it wasn’t long ago that we had no Christmas lights at all – so we hope everybody enjoyed the event, and we look forward to seeing everything else that Southampton has to offer this Christmas.”

Igloo Energy Head of Marketing Deborah Lamb said: “As a local company employing local people, we’re passionate about being part of the community – so supporting one of the city’s most important Christmas events was an excellent opportunity to help give everyone a great night out. The team and I really enjoyed ourselves and I’ve got to say the turn out and atmosphere on a very cold night was brilliant!” 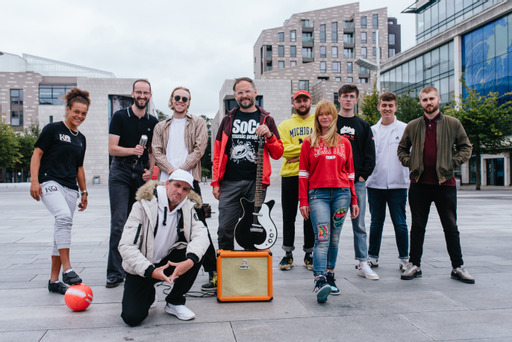